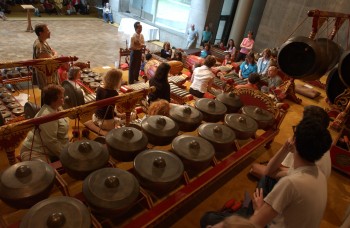 Eastern European Jewish folk music provides the complex example of a music that evolved in one of the Jews’ many diasporas, moved to another (North America), then cycled back to Europe and around the world over the last 30 years, operating both as “heritage” and as a “world music” for Jews and non-Jews. Slobin (2000a, 2002), Lausevic (2008), and Robertson (2010) will serve as primary texts.

Several music genres (Chinese operas, Asian American jazz, taiko, new compositions, and diasporic pop) from Asia and Asian America will be comparatively studied to critically examine how immigration, travel, and transnationalism have triggered crisis and new opportunities for musicians and communities to invent and claim their own voices on community, national, and international stages. We will closely look at some of the musical means by which Asian and Asian American musicians and communities have been constructing their cultural identities. The session will also explore how creative diasporic individuals deploy conventional boundaries, such as East-West, in creating and popularizing their music products. Zheng (2010) and Wong (2004) will serve as primary texts.

Musical artists from Mali, Senegal, and Guinea (all part of the 13th-16th century Mande or Mali empire) have had an extraordinary global presence. The symbolism and legacy of the Mali empire remains compelling to this day, and musical artists from this region have been trend-setters for the rest of Africa, creating musical genres that are both highly innovative and deeply rooted. We will examine the various historical layers and geographic interactions, from the most local to the global, to see how traditions dating back many centuries have been shaped to speak to the contemporary lives of Africans, at home and abroad, as well as non-Africans. Of special concern will be the ease with which boundaries such as old (traditional) and new (modern), Africa and Europe/USA, local and global, and popular and elite can so easily be blurred. Charry (2000, forth.) will serve as the primary texts.

The Javanese gamelan ensemble has travelled outside Indonesia via several networks. As the research interest of one of the founding fathers of ethnomusicology, Jaap Kunst, the presence of a set of gamelan in universities has almost become emblematic of the discipline of ethnomusicology. From the wax cylinder recordings of gamelan at the 1893 World’s Columbian Exposition, Javanese gamelan has maintained a constant and influential presence in the world music industry.  Most overwhelmingly though, the global pervasiveness of gamelan is demonstrated in the many hundreds of ensembles and performing groups which exist outside Indonesia, in locations as varied as the US, Britain, the Netherlands, the Czech Republic, South America, Australasia, Taiwan and Japan, to name but a few.  Unusually, only a few of these gamelan cultures (e.g. Surinam and Singapore) have developed as the result of migration of Indonesians. Instead,  and in contrast with many other traveling music cultures, gamelan outside Indonesia is largely powered by performers with no ethnic or obvious cultural ties to Indonesia.

Whereas gamelan has become an object of fascination outside Indonesia, European music has long been Indonesia’s ‘significant other.’ Its presence in the archipelago can be thought to represent a ‘Western’ sense of beauty and order and cultural superiority.

In these two sessions, we will explore how gamelan has become enmeshed and reinterpreted in a variety of new cultural and geographical contexts, from experimental composition to prison reform.  We will also investigate the presence of European music in Indonesia, paying special attention to the incorporation of European brass band in gamelan ensembles. In all these situations, the development of the migrating music has been guided by a complicated interplay between presentations and perceptions of the particular  music in question and the ways in which these connect with local interests and ideologies. Mendonça (2010) and Sumarsam (1995, 2004) will serve as the primary texts.

The didjeridu (long trumpet) and jembe (drum) have travelled extensively outside their ancestral homelands in aboriginal Australia and western Africa, respectively. Some similarities in their receptions and usages are uncanny; the many differences are equally instructive. We will examine what these instruments symbolize, how they have been appropriated and embraced around the world, and the economic and cultural impact back home, stimulating new interest. Hadley (2008) and Charry (1996, 2000) will serve as the primary texts.

There is a long and celebrated history of black American musicians going to Europe in search of greater artistic freedom and far less restrictive racism than was typical in the United States. While long-term moves to Europe have became more rare since the 1960s, many post-civil rights era black musicians still make it a point to perform in Europe because they find appreciative audiences and well-paying opportunities with more consistency there than in the United States. This is especially true for musicians who fall outside the conventional black music genres that dominate in the US.  In this session we will consider the transatlantic musical exchanges that have occurred as black American musicians have taken advantage of creative opportunities in Europe. We will focus on the American Folk Blues Festival tours of Germany in the 1960s; the experiences of African American gospel vocalist Madeline Bell and her collaborations with British vocalist Dusty Springfield in London in the 1960s; and the 2004 Daughters of Soul that featured six African American women vocalists and played at three European jazz festivals. Working from these historical and ethnographic examples, we will discuss the impact of these movements of people and music on the creative work and professional profile of the African American musicians and the impact of their musical presence on their local counterparts.  We will consider the extent to which Europe was and is a “safe” space in which African American musicians can escape the racialization that shapes their professional and personal experiences in the United States and the ways in which their race and nationality matter in Europe.  We will attend to the local meanings of race, gender, and genre in these European contexts, particularly the ways African American musicians profit and suffer from Europeans’ fascination with a black musical other, the ways ideas about black masculinity and black femininity are produced and challenged through music, and the different ways definitions of and expectations for musical genres influence their experiences. Throughout, we will be attentive to the different forms of music-centered writing–ethnography, biography, and critical historical writing–to document and analyze these processes.

This session will examine the musical and social landscapes of Haiti and Jamaica, paying particular attention to the intersections of music, identity, and various forms of spiritual and political worship and power. To what extent does music making facilitate an effective response to social misery caused by natural, political, and/or socioeconomic catastrophes? How can music sustain transnational linkages between the Caribbean and the United States? How can music facilitate the policing of boundaries between local and foreign, holy and worldly, church and dancehall, and human and divine? Highlighting the cultivation of long-distance national identities and the migration of sound and practice to and from the Caribbean region, we will also explore the extent to which the musical practices of Caribbean peoples constitute a form of resistance in the face of local and global oppression.

The recordings that scholars made as they traveled around the world in the early 20th century set into motion new ways of understanding and archiving expressive culture. Today, new technologies remain key to both scholarly research and pedagogy and artistic expression, especially as it has become easier and easier for artists to acquire and use them. These two sessions will allow participants to interact and engage with the most recent forms of technology and user interfaces, including do-it-yourself music production. In the morning session we will examine some of the innovative ways that ethnomusicologists use technology to improve the process and transmission of their research, look at the most recent advances in recording and video technology and web applications, and explore new media technology that is being used to present research findings, including the EVIA Digital Archive and the Virtual Instrument Museum. In the afternoon session, we will look at new uses of technology in Africa. The role of music videos in Kenya and Tanzania will serve as a case study to show how this medium has provided debate about morality, ethics, and identity in eastern African society. We will also examine the transformations occurring due to the influence of piracy and the ease with which people can manipulate and trade digital files. In both the morning and afternoon sessions, we will explore the role that technology plays in influencing the ways that we present and hear music.

The increase in migration and refugee flow, greater travel possibilities for musicians, and the arrival of instantaneous media such as YouTube have upset earlier models of musical transformation. We will examine how standard “homeland-diaspora” approaches or simple “globalization” analyses are shifting towards an appreciation of how musicians and their audiences can imagine themselves more fluidly than before. These  sessions, spread out during the two weeks in order to incorporate the visiting lecturers, will serve as the focal points for the Institute theme “Ethnomusicology and Global Culture.” They will consist of a combination of directed discussion by the faculty, assimilating the case studies presented throughout the Institute, and participant presentations, based on their areas of expertise. Works studied throughout the Institute, as well as others, such as Comaroff and Comaroff (2009) and Ramnarine (2009), will serve as the primary texts.